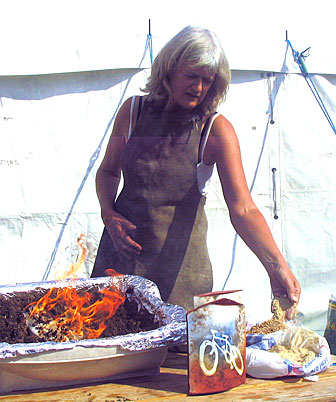 More information on the development of this technique can be found in an article written by Tessa Wolfe Murray for Ceramic Review No: 148.

Tessa Wolfe Murray developed her smoke firing technique as a result of determined necessity coupled with a fascination with fire. The traditional method of burying a low or unfired pot in sawdust underground or in a container and leaving it to burn slowly for between 8 and 24 hours did not suit the pots she wanted to make.

She wanted her pots to be glazed internally so they could hold water and act as functional containers. In order to do this they had to be relatively high fired. Another hurdle was the slab building technique used to construct the pots: the joints were vulnerable to the fluctuating temperatures of a traditional sawdust firing. Her first attempts resulted in a succession of broken pots.

Rather than compromise on the element of function in her work, Tessa Wolfe Murray experimented with other methods of achieving smoke fired results. By soaking sawdust in white spirit and sprinkling the surface of a pot heated to 100 Celsius, a quick burst of flame and smoke resulted in the outer unglazed surface absorbing the carbon and minerals permanently. Only a firing in a gas or electric kiln to 600 Celsius would remove those smoke fired marks.

Another positive result of these experiments was the element of control possible using this method. The smoke firing takes place in the open air, the pots laid in a fireproof bin surrounded by sawdust lightly soaked in water. Areas of the pot can be masked by placing this sawdust on the heated surface, so protecting it from the smoke and flame of the lighted sawdust.